A radical rearrangement and refurbishing of the Cathedral was begun in 1982 to meet the requirements of the revised Liturgy. The artist responsible for this general scheme has been Michael Biggs of Dublin, in consultation with local architect Gerald MacCann. 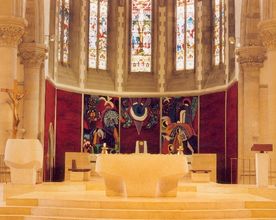 To encourage maximum participation by the entire congregation in the celebration of the Eucharist, the altar is given pride of place in the crossing, just at the point where, because of the deliberate absence of stained glass in the rose windows of the transepts and in certain other high-level windows, the natural light of day is brighest and most concentrated. The altar is carved from a single piece of granite from south County Dublin. As an integral piece of natural stone it suggests the primeval offering of sacrifice. Its carefully-wrought carving humanises that concept, so that this great rock is transformed into a table, inviting the worshipper to partake of the sacred meal in communion with the Lord.

On two curved platforms to each side of the altar and a little behind it stand the ambo to the north and a cantor’s lectern to the south. The design and material of the ambo follow those of the altar, but its basic form is that of a reading-desk rather than a table. The wooden-topped lectern is of more modest proportions and dispenses with the curved contours characteristic of the major elements.

The third of these liturgical elements is the bishop’s chair (whose outline, as seen from the front, is for the most part an exact inversion of the ambo).
This stands in a central presiding position, raised ten steps above floor level, in the vertex of the apse. In spite of its great distance from the altar, the sense of a unified grouping is undiminished. A wooden back is inset into the chair, and into this in turn a gilt-bronze roundel or medallion bearing the inscription: HAEC EST SEDES EPISCOPALIS CLOGHERENSIS (‘This is the seat of the Bishop of Clogher’). 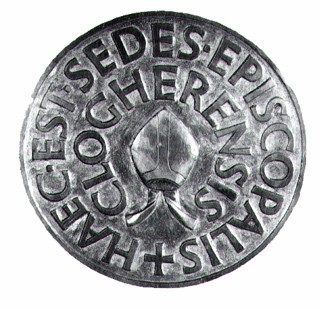 The altar, ambo and bishop’s chair as well as the baptismal font, were carved by the designer Michael Biggs.

The chair is flanked on either side by a semi-circlular bench for concelebrants, to denote the unity of the priesthood with the bishop. This arrangement of chair and bench was traditional in early Roman stational churches.

There are two other smaller fixed seats nearer the altar, designed in the same mode as the lectern; one as an alternative seat for a priest who may be presiding; the other a ceremonial place of honour for a guest.

The steps, in solid Travertine marble, are arranged to highlight each of the three liturgical elements in turn – the altar, ambo and chair – and to clarify the relationship which exists between them as a whole.

The sanctuary crucifix is by Richard Enda King. The cross is of Irish oak, and the upright, a single piece, rises 15 feet from the floor. The figure of Christ, calm and compassionate, is cast in bronze. The wood, in contrast, is given a softened textural finish to heighten its organic nature as the living cross of Jesus Christ in the world today. The crucifix is the gift of John Finley of Boca Raton, Florida. 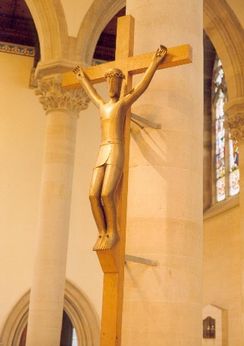